How to control toy clutter

A few weeks ago I found myself in the middle of a toy problem.

Not just any toy problem. I’m talking a BIG FAT HAIRY toy problem. A problem big enough to send me over the edge.

Don’t believe me? Look at this tornado!

The funny thing is I have no idea how we found ourselves in this situation. We don’t buy our kids toys except for birthdays and Christmas, and even then it’s very minimal. We typically only do no more than three gifts a piece.

So how did we end up with so many toys?

I suspect it’s because we have been blessed with so many generous friends and family who lovingly give my kids gently worn toys or a huge amount of gifts on Christmas. Not that my kids are complaining, they love getting presents and there are so many new toys out there such as these pink remote controlled cars that I know kids would love to play with. It’s just trying to find the balance of accepting new toys and letting go of the old ones. I am SO grateful for others’ generosity, but I guess we had gotten into a bad habit of receiving gifts from others without letting go of others.

I tried to make it work. Really I did. I had organizing systems. I had toy bins. We had a cleaning routine in place. We took the toys out of the kids’ rooms.

None of it worked and I would find myself nagging my kids all day long about the mess that had exploded like a volcano all over the entire house. They hated it. I hated it. Why wasn’t my organization working?

I’ll tell you why. Again, like in my kids’ bedrooms, I had set them up for failure by allowing them WAY too much stuff. You can’t organize clutter!

On one particular Thursday night I got a wild hair. After a little inspiration from a blogging acquaintance that took EVERYTHING away, I had enough of my empty threats and decided to make good on them. Empty threats were only making the situation worse.

I sat them down and explained to them that it was difficult to take care of the toys that we had and keep them picked up because we had too many. I told them I was going to try something new. We were going to get rid of a lot of toys, and keep out only three sets of toys each. The rest were going to be put away in the closets.

I expected a fight and I was prepared for the whining, crying, and bargaining. You see they LOVE their toys. They play hard all day long, and as you can see from the picture above, they are quite good at it. To my surprise, they did not throw a fit and not one tear was shed. They said ok and made the decision themselves on what they wanted to give away, what they wanted to keep out, and what they wanted to put away in the closets.

I’m not going to lie. It was a huge job. So huge that I had put it off for so long because it seemed like such an overwhelming task. With everyone on the same page though, it wasn’t quite as bad as what I thought. The kids helped me sort and my husband played Tetris in the kids’ closets putting everything away. God bless that man. I had another solution to hand in case this did not work, and that was getting ourselves one of those Classic Sheds for storage, they are amazing and can fit so much in. I was going to divide up the toys, put them in boxes and label them so nothing got mixed up or any more arguments started up again! It meant that they were close to hand, but they weren’t cluttering up my house and they were safe in their own storage area. Come to think of it… that does seem like a good idea for our grown-up things! Another benefit of having our very own storage space is that it can live with you forever. Even if you decide that you’ve outgrown your home, you could always decide to look for companies that move sheds, so you don’t need to think about finding another one. They can just transport it to your new space for you! If you ask me, I love that idea. So, I’m glad that we have another solution in place should our initial idea fail, or if we continue to have hoards of clutter that we have nothing to do with. I’m actually excited to get it all sorted now.

What did they keep?

My three year old little boy kept his dinosaurs, large Transformer robots, and his magnetic tiles. The train table stayed out, but all the trains and tracks were put away. I would have taken the train table out, but I have no place to put it right now.

My six year old daughter kept her Barbies, My Little Ponies, and her American Girl Doll.

I also let them keep the kitchen set with the dishes only. The playfood all got put away. They were allowed their super hero capes and one dress up outfit a piece.

Yes it worked! I can’t believe I waited so long to do this. It has been so worth it! Sure they still make a mess with the toys they do still have, but it’s so much easier to pick it all up even if they get every single little thing out. I’m not nagging as much, which makes me happy and I know it makes the kids happy. We’ve worked out a system that if they want something down from the closet, something else has to go back up. So far in a month’s time they have only asked for something down one time. I guess out of sight, out of mind.

There’s now more room to run, play, and let their little imaginations run wild. Run wild they do, let me tell you! Just look at that after picture. Refreshing, eh?

I have plans in the spring to rotate a couple of toys out and see if we can donate a few more things from the closet stash, but for now I am very happy with our new arrangement. I finally feel like we are making progress on getting this chaotic house situation under control. Whew! That felt good!

What about you? Do you have a toy problem in your house? Would you ever do something like this or have you ever? 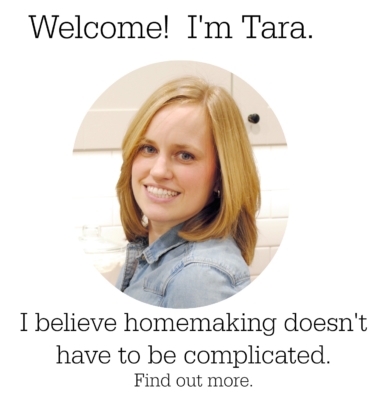